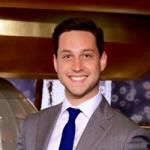 Scott serves as a producer and account executive for the Marsh & McLennan Atlanta office.  He began his professional career in 2014 at Marsh & McLennan as an intern, where he would serve in various capacities in the coming years. He became an Assistant Vice President at Marsh in 2018, where he assisted clients in various industries. He subsequently moved to Marsh & McLennan Agency in 2019 to focus in enterprise risk management and insurance brokerage for technology and life sciences companies.

Scott graduated from the University of Georgia in 2016 with a B.B.A. in Risk Management & Insurance where he was a member of Delta Sigma Pi. Scott has worked with a number of prominent clients in various industries, with particular experience in technology and life science. He received his CLCS designation in 2019 and holds four insurance licenses across property, casualty, life and health insurance.

Scott serves on the board of directors for the Atlanta chapter of the Association of Information Technology Professionals. He enjoys traveling abroad, spending time with his family and friends, and is an avid sailor and fisherman.