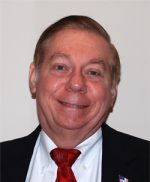 Julian has been an active member of the Atlanta Chapter since 1981, and currently holds the chapter record for Perfect Attendance at regular business meetings (34 years).

He recently retired from Georgia Piedmont Technical College (formerly DeKalb Tech) in Clarkston, Georgia where he was the Dean of Academic Operations. He has been involved in the IT field for more than 40 years, and has served on the Chapter Board of Directors since 1988, including serving as Chapter President in 1991.

Julian was the chapter’s representative to Region 7 for many years, and also served the region as Treasurer (2001-2003), Vice President (2004), and President (2005-2007). Following several years (2010-2013) of service on the Association Board of Directors representing the Southern District, he served as Association Treasurer in 2014, as Executive Vice President in 2015, and as Association President for 2016, when he led the transition to our new partnership with CompTIA. When not participating in AITP activities, he serves as Treasurer of his church and is on the board of directors of three local non-profit foundations. He has also participated in the Peachtree Road Race the past eleven years.